It has been 9 months since I first shared experience to track tennis performance with Apple Watch.   Backing up by popular demand(Surprised so many visitors found this blog from search engine all over the world), I’d like to take it further with a more in-depth review, of my own experience tracking and analyzing my tennis workout with the Swing app.

Comparing to the tenniskeeper, which I also proudly paid for,  Swing has a much better UI design interface that connects to my emotional part of the brain- It simply makes me feel “enjoyable” to use it.   That is the primary reason I am sticking with it this year.

What am I expecting from this tracking app

Once becoming a paid customer, especially at this price – $80 anually($$6.49 X 12) – the expectation is naturally soaring.  Ideally, the product is delivering MUCH MORE value than its cost.  This is also the plan to structure this article:

Following are the potential value it can appear to a regularly exercised tennis enthusiast like me:

All the dollar value here are subjective, serving the purpose of evaluating its cost mostly. You can also tweak it based on your own weight or criteria. For me, I’m happy to pay for the $6.49 subscription fee, as long as the app delivered all of my above expectations(an $8.40 value).  But does it?  Let us see:

What the Swing tennis tracking app is delivering 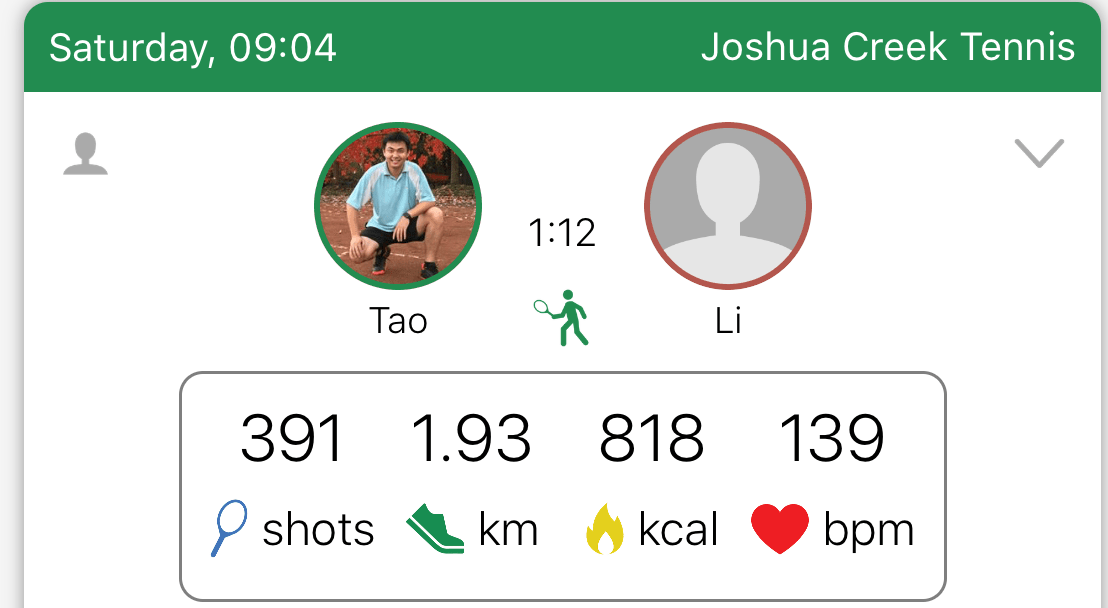 As an analyst, aggregated metrics is never enough. At least we need to break them down by time series.  This is the time that my disappointment kicks in.  I don’t understand why the “running total” is used in both “distance run” and “Calories burned” chart.

By doing this it smoothened the trend and made it almost a straight line, and it has become almost impossible to detect any signals that could catch my interest.  The only one that is useful to me is the heart rate breakdown – it is telling me I have peaked at 180, and the valley illustrate my break time between games etc. 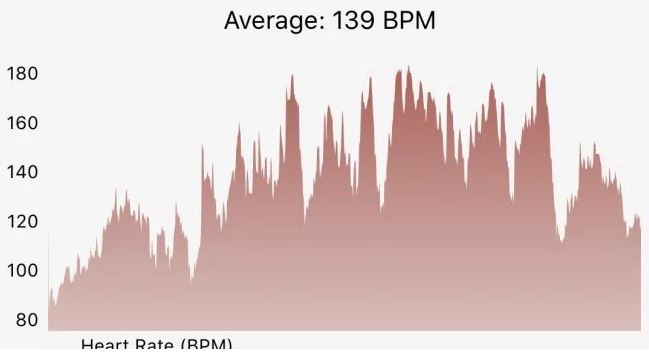 In the end,  I will still give a passing mark on this piece – 65% – slightly above borderline. The metric is available, but not displayed in a way that can be easily consumed (by an analyst).

The basic metrics can be tracked with other tools even like a Fitbit (I believe). What set Apple Watch apart is the ability to track the details of every single shot – its swing speed, velocity and being able to detect what shot it is – forehand, backhand or serve. It usually required a professional tool like Zepp, a dedicated gadget.

It is logical to think the Apple Watch can track it, as it is a similar motion with swimming stroke- which can be tracked natively. Apple didn’t provide native swing tracking feature, which is understandable as the tennis segment could be too small, and they might also want to encourage 3rd party app(like Swing or TennisKeeper) to do the work for them.

The caveat here is in order for the watch to capture all these additional data, it has to be worn on the swing hand. For me, that means I need to switch it from my left wrist to right wrist whenever I play tennis. Not convenient, but necessary steps in order to get the data.

How is Swing doing in this area? Here is the output we can get after 1hr of tennis game with its “practice” mode tracking only: 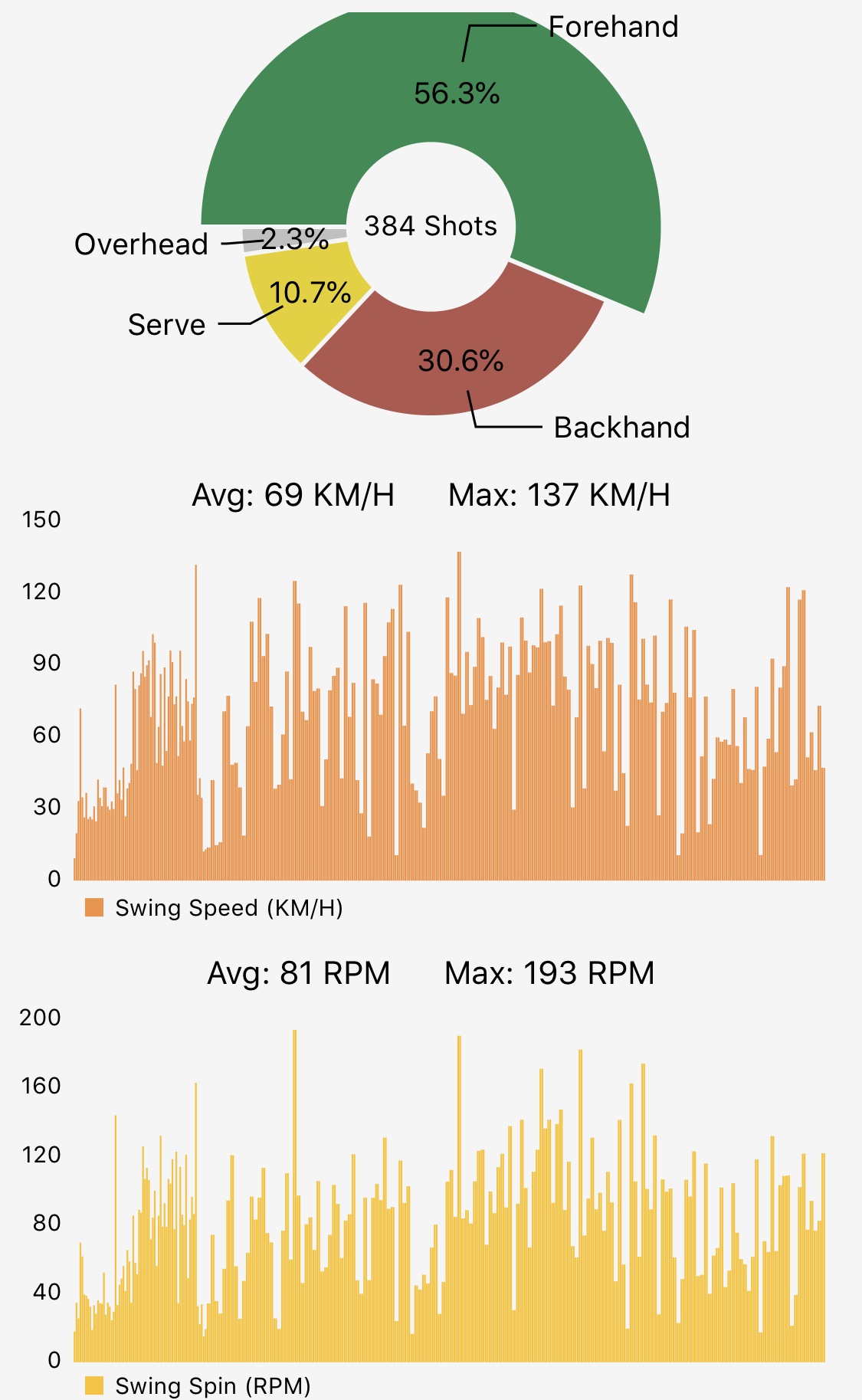 The only “miss” is its inability to display volley/groundstroke.

Overall I would give it 80% mark – the visualization has surpassed my expectation, and the app keeps getting better with continuous new releases.

The feature that can provide me the most value is actually not difficult to achieve technically at all. We just need to move the finger to the “Serve” slice of the pie, and the same chart will give the speed and spin velocity just like the one showed previously for forehand shots distribution. 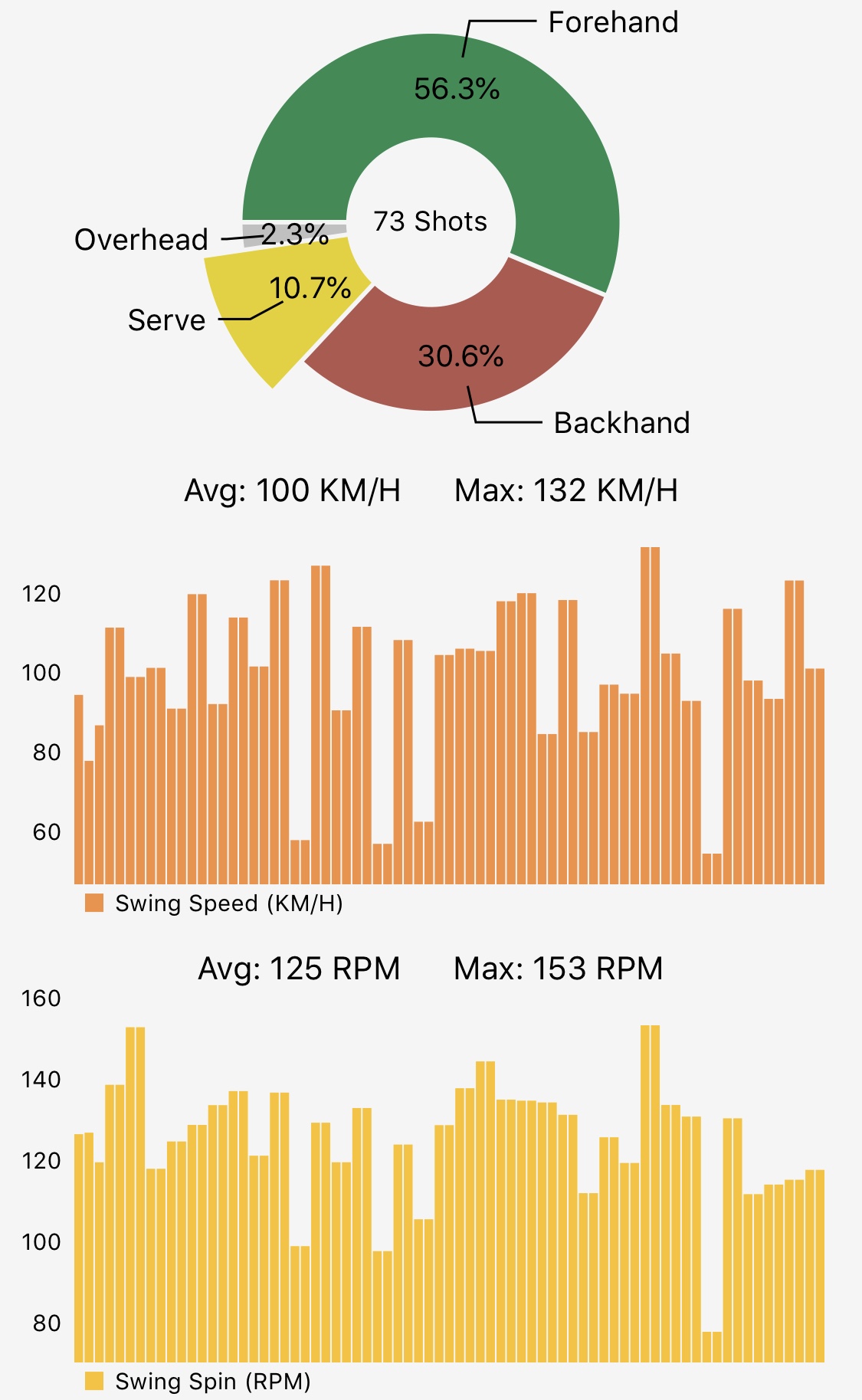 The key takeaways here – 73 serves in a match produce 100km/h average speed (which is roughly 60% of Rafael Nadal), and my fastest speed is currently at 132km/h – a little embarrassing but seems trustworthy.  I used to test my fastest speed at Rogers cup event a few years ago, and it was indeed between 130-150 km/h mark.

These stats are quite actionable: I want to improve my serve and they can help me understand if I am on track or not. For example, for the winter of 2018/2019 season, I want to improve my service speed by 10% – that translates to 110 km/h of average speed, and 145km/h of max speed. Let us plot the chart by the end of the season, like this post for swimming performance, to see if I am able to make it, and subsequently analyze why/how.

There is a small software bug here- as almost all the serves were double counted (showed two bars next to each other).  It won’t impact the average number, but still disturbing.

Overall this one is definitely meeting my expectation and I will give it a 95% mark.

As I pointed out previously, the app still has room to improve. Here are some challenges I have faced so far, that you might need to be aware of:

Different from the other health apps I have been using, the Swing app didn’t have a place to export all its data to a format like CSV.  This is a red flag to me, as it doesn’t have the open attitude to let the users, who ultimately owned all the data, decide what can we do with them.

Technically it won’t be a challenge at all, as all of the data are clearly stored in a cloud storage place like AWS or Google Cloud or Azure.  I understand it could be counter-argument claiming that the data format might not be readable to the normal user. But, that isn’t the job for the app developer to clean the data for the user.  As a professional analyst, I can do that part myself.   The lack of openness attitude concerns me a lot more.

Hopefully, they will add this feature down the road.

Compared to the tennis tracking experience 9 months ago, it is much more useful and satisfying right now, with the working swing distribution and serve speed tracking, using the Swing app.  The new Apple Watch Series 4 with Watch OS 5 plays a role here. But I will bet the previous generation will still do the work, it might just be a bit slow.

Overall, it is a worthwhile investment to me with $6.49 CAD per month, and likely to those folks who love tennis and also are curious about the numbers and metrics.

Some flaws still exist and could be bothering for now.  As an early adopter, it might be inevitable.

I’d like to start to track it my tennis workout as “match” instead of practice.  In this case, it will provide much richer scoring tracking.  It requires me to change habit again – look down and press my watch on every point. We will see how that experience will translate to my game performance.  Update: I actually did it 4 month later.  You can check out this post:Tennis score tracking and exported data analysis with Apple Watch using Swing App

Also I’d hope to validate the running distance myself. The raw number should be stored in the Apple workout exported tables.

Lastly I will keep an eye on Tennis keeper. Their blog seems to be quiet recently.   These two app are competing directly with each other. I am a strong believer of competition drives customer experience.

Folks running Google Analytics 4 through #GoogleTagManager, there's no need to go through the clumsy dL.push({ecommerce: null}) (https://developers.google.com/analytics/devguides/collection/ga4/ecommerce?client_type=gtm#clearing_the_ecommerce_object) between ecommerce pushes.

Instead, build your "items" variable with this template: https://tagmanager.google.com/gallery/#/owners/gtm-templates-knowit-experience/templates/gtm-ga4-ecom-items-dlv-version-1-variable

GA4's Access Logging API is launching. Get a raw log of who's accessing your property's data, be it via API, UI, or Google integrations. This supports a number of interesting audit journeys for access and property management. #360only

If #GoogleTagManager is no longer working in Preview mode (no container loaded, no messages in Preview), it's likely related to a conflict bug with some JS libraries (polyfills.js in particular).

You should see a message related to defineProperties in the JS console.